City Brands: Dealing with a lack of control

A mini-article published on 19 September 2014 in Tronvig Group’s Blog at http://www.tronviggroup.com/city-brands/

Cities have become important actors on the global scene. Metropolitan governments are among the best ‘glocal’ players, sharpening their global influence strategy and improving the management of their brand. International city branding has its undeniable challenges, however. One of them is the fact that cities must utilize their symbolic, or brand, capital—the resources and influence afforded to them through a perceived value—in an increasingly decentralized, fluid, and mediatized, or media-shaped and -defined, environment. This implies weak control over ones’ brand.

Let’s take a look at how branding can benefit local economic development and how to cope with the many factors that wrest control of the brand from its masters. This article is largely based on my new book, The Political Economy of City Branding.

One basic mission of cities in the global age is to find a productive relationship between the local community and its larger environment. We can see cities as systems that attract values from the outside world (in our digital age this is even less inhibited by space and territories), define those values through consumption, exchange, production, and export of products and services to global markets.

Branding is a strategic intervention in the typical functioning of a city that addresses the relevance of its urban resources and influence, thus seeking to increase attraction to and export power of the city. The more successful it is at this, the better chances the city has for long term prosperity. A city’s economic value can be broken down into industries and clusters that make up the city’s industrial composition, which ultimately compose its economic identity. To clarify, we can build a generic economic city typology, which relies on production and consumption operations. We can divide city profiles into four broad categories: capital, knowledge, mobility, and pleasure. These categories form a field of post-industrial activities that add high value to a city, as illustrated in the figure below. 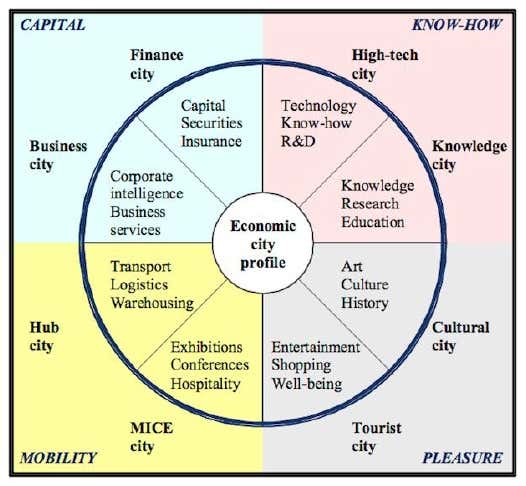 We may consider a well-defined city profile as its economic identity, which serves as the basis for branding and an aid to economic development policy. However, the global scene on which such branding is supposed to make a difference has its challenges, one of them being its mediatized (media-influenced) nature. This poses obvious challenges to metropolitan brand leadership.

Brands are created to benefit from symbolic values attached to products, organizations, or communities. They are created in an environment that can sometimes be favorable to the brand creator, but more often than not are teeming with factors prone to dissolve, redefine or nullify the brand—or even worse, leave it unrecognized.

City governments are not free from such a dynamic and the related social entropy, understood here as the ‘disappearance of social distinctions.’ Indeed, cities want to become associated with vital factors that contribute to their productivity, innovativeness, and attractiveness. Examples of well-known associations are Frankfurt’s association with finance, Vienna’s with international meetings, Milan’s with fashion, Portland’s with sustainability, and Boston’s with IT and intellectual capital. Such aspirations seek their realization in the elusive symbolic fields, which are widely mediated by mass and social media. Hence, there is a natural intertwining of branding and media.

City rankings as snapshots of a symbolic urban battlefield

Our lives are increasingly mediated by different kinds of media, from traditional mass media to various forms of new media. From the branding point of view, such an environment contains a range of uncontrolled elements. An illuminating example is city rankings, which are created by third parties, but affect the reputation of ranked cities. Even the inclusion of a city in the sample of a global industry-specific ranking is a good sign, as if ranked cities were members of a global club that have passed the first test in the process of gaining global media publicity.

City rankings are lists of cities that are evaluated and ranked with regard to different economic or other characteristics, in order to reveal the position of each ranked city as ordered according to given criteria (Giffinger et al., 2008). For example, in Saffron’s city branding ranking, the top cities globally were Los Angeles, New York City, London, Paris, Seoul, and Barcelona (The Guardian, 2014). Another ranking based on the Anholt-GfK City Brands Index of 2013 named London, Sydney, Paris, New York, Rome, Washington, Los Angeles, Toronto, Vienna and Melbourne as the top ten global city brands (GfK, 2013).

Such rankings provide a shortcut to the symbolic battlefield of cities, regions, and city-states. The implications for urban managers are obvious: cities are under considerable pressure to move up the rankings and to establish themselves as national, macro-regional, or even global hubs. As rankings are not guided by any generally accepted quality standards, they can be produced by any party and may be based on an analysis of relevant measures or not as the case may be.

When rankings are published in magazines, newspapers, and blogs, they start to create saturation of the top cities in the given industry, and thus contribute to the externally-influenced part of a city’s competitive identity. What would you think of the impact of such headlines as ‘Detroit tops 2013 list of America’s most miserable cities’ (Forbes, February 2013), ‘World’s costliest cities: Sydney and Melbourne ranked in top 10 by Economist magazine’ (ABC News, March 2014), ‘Ottawa ranked top global city by Toronto think tank’ (IT World Canada, August 2013), or ‘New York ousts London as top financial centre’ (Financial Times, March 2014)? No wonder many large cities have started to follow rankings and even publicize them selectively on their websites to substantiate the facts about their assets and performance (See e.g. Singapore Facts and Rankings, 2014).

Coming of the age of proto-brands

Branding is about conveying the symbolic essence of a city to target audiences for strategic gain. This essence has various sides, which reflect different aspects of the power to define and control a brand. To shed light on this, let us consider four interrelated concepts at the core of branding:

In this scheme, identity and brand are constructed on the side of a brand creator, but in the case of image and reputation, the weight is on the receivers’ side. We may place the aggregated image or proto-brand (defined as the constantly evolving and co-created brand) somewhere in the middle of such a continuum.

As willing as city governments would be to control their brands, they have limited power to do so. There is actually a never-ending power struggle between brand creators and brand receivers.

Simon Anholt, for example, claims in his book, Places: Identity, Image and Reputation (2010), that the ‘brand’ of an urban community is only a metaphor, not a real brand comparable to the brand in business. This is primarily because of the diffused and unaligned nature of cities and the difficulty to manage the city as a brand. That is why he prefers the term ‘competitive identity’ rather than ‘city brand.’

Whether the term ‘city brand’ is justified or not, there is need to take into account the inherent lack of consistency and alignment typically afforded to businesses. This is why we rely here on a slightly similar idea by highlighting the emergence of proto-brands, which Wilmot (2010) crystallizes as follows: “As social media and technology open up development, co-creation will become the normative process for many brands.” City rankings are part of this same trend. When rankings are formalized and communicated to a wide international audience, they create proto-brands of cities, which come to be compared against the consciously created, identity-based brand promoted by the city government.

A way forward for city brands

In a mediatized environment, it is not enough for a city to do things well. It is equally important to affect the global scene on which cities are presented, benchmarked and ranked, as such a semantic presence is “the other half” of the untamed brand of a city.

Cities will always be proto-brands of a kind, distracted by their constantly-evolving internal identity and affected by external forces. However, this does not prevent city governments from making efficient use of available assets and extracting values from the world in the digital age using their collective symbolic capital. There is a plethora of cases that illustrate success in such an endeavor, such as London, Paris, New York, Toronto, Sydney, Amsterdam, Seoul, Dubai, and Singapore. What is needed in making things right is more than anything: clear understanding of city’s economic identity, a brand strategy that is linked with such an identity, and industry-specific brand communication that is adjusted to the logic of a mediatized environment.