If we want to understand the nature of urban economy in the globalised - and at the same time 'delocalised' -  world, such an analysis should be more than about local GDP, industrial composition, occupational structure and the like. A need for deeper understanding of urban economy calls for paradigm shift, a transition from a static place-based approach to a "Flow Paradigm", which operates with such concepts as urban attraction, dissipative structure and frictional and frictionless flows. Such an approach starts from the observation that flows are constitutive elements of reality and define our social existence. Urban communities are best to understand as dissipative structures and thus as ecosystems in which there is a continuous exchange of energy, matter, values and symbols between the community and its environment. In other words, dissipative structures breath through their material and immaterial flows, thus providing tools for reconceptualising places and local economies in particular (see Anttiroiko, 2015).

From the space of flows to a new flow paradigm
An important source of inspiration for such a flow paradigm is Manuel Castells' theory of network society and one of the insightful ideas related to this theory, the space of flows. Castells (1989, 351) points to a local-global dialectic that poses a challenge to local government: first, production in the informational economy becomes organised in the space of flows, whereas social production continues to be locally determined, and second, local governments must develop a central role in organising the social control of places over the functional logic of the space of flows. Castells’ conceptualisation of the local-global dialectics is fine as such, but the way the space of flows is conceptualised warrants further sophistication. The need for reconceptualisation comes simply from the fact that flows have been understood in macrosociology and political economy too vaguely, including Castells' works (see Castells, 1989; 1996). They are usually referred to only passing without theoretical grounding and sufficient empirical specification.

Due to increased fluidity and mobility in economic life there has been in the recent decade a clear increase in the interest in global networking in business and governance. Now it seems that this discourse is developing towards sophisticated flow paradigm or economic ‘flowology’ with an aim at gaining better understanding of the new economic reality and its dynamics. Such a paradigm is manifest in various emerging concepts, theories and approaches, which seek answers to the question of the nature of this new reality, including new mobilities paradigm (Urry, 2000) and the politics of flows (Hubbard, 2001; Doel & Hubbard, 2002; Halbert & Rutherford, 2010). There are also urban analyses that go beyond individual flows to wider set of flows (Gertler, 2001; Williams & Baláz, 2009) and urban-regional analysis of economic flows of particular cities, regions or city-states (Laakso et al., 2013; Yeoh & Chang, 2001). Furthermore, there also are attempts to provide comprehensive analyses of our world in terms of flows (e.g. Van Hamme & Grasland, 2011; 2012) or holistic picture of the world economy by analysing the global material and immaterial flows, as in McKinsey Global Institute’s ‘Global flows in a digital age’ (Manyika et al., 2014) and the ‘DHL Global Connectedness Index 2014’ report (Ghemawat & Altman, 2014). Such analyses tell about a need to understand the fluidity, mobility and connectedness of our world and the fundamental aspects of the morphology of the new economic reality. Why? One reason is simply the fact that higher degree of connectedness of a nation has a positive correlation with the GDP growth, as suggested by economic theory of comparative advantage (Manyika et al., 2014, 6, 21-23).

Towards methodological sophistication
An interesting feature of the development of flow paradigm is the continuous methodological sophistication in terms of data, methods and interpretative frameworks, which makes it plausible to make methodology-wise a distinction between the earlier analyses of the internationalisation of the pre-1980s world and the development of approaches with increased sophistication of the analyses of globalisation of from the 1990s onwards. This reflects interestingly to some extent the transition from the internationally-oriented search for low-cost production sites to the emerging global era of knowledge-intensive flows organised within complex production and innovation ecology (Manyika et al., 2014, 17).

Descriptive statistical analysis of specific cross-border flows have fairly long history, which had their methodological culmination in inter-regional flow analyses within regional sciences in the 1950s and 1960s (Isard, 1962). In the 1980s the shift from domestic economy to international economy gained ground, culminating in the globalisation discourse of the 1990s. The manifestation of this new period can be seen in methodological sense in research on global cities, first within political economy framework (Friedmann, 1986; Sassen, 2001) and later by the projects of GaWC research network with a strive for understanding global value flows through the world city networks. Research within GaWC started with the collection and analysis of data on corporate service office networks and later continued with the exploration of the spatial configurations of hyperlink networks at the interface of web mining and social network analysis.

The recent phase of this development seems to bring the true flow analysis into the picture, which benefits from Big Data analytics and multi-dimensional interpretative frameworks (Manyika et al., 2014; Ghemawat & Altman, 2014). As described by Manyika and others (2014) in the preface of their analysis of global flows in a digital age, “[w]e know a great deal about individual flows such as goods trade and cross-border financial flows. Yet little research has been done thus far that seeks to paint a comprehensive picture of the web of cross-border interactions of the different types of global flows that increasingly characterizes our world.”


From the margin to the centre
The term ‘flow’ is mentioned only passing and can hardly ever be found in keywords or indexes in the literature on urban management and urban economic geography. Flows have remained in the margin of urban analysis so far. It urges us to start an exploratory journey to shed light on urban flow analysis and its relevance for understanding the new premises of local economic development policy (see Anttiroiko, 2015). Such an endeavor certainly benefits from interregional flow analysis developed in regional science as well as from the models and concepts of mainstream economics, but it has to take a new course towards urban analysis in order to understand how such flows relate to the fixities of local communities, how they constitute local economies of late modernity, and how they eventually blow life into spatio-temporal instances of everyday life in the globalised world. 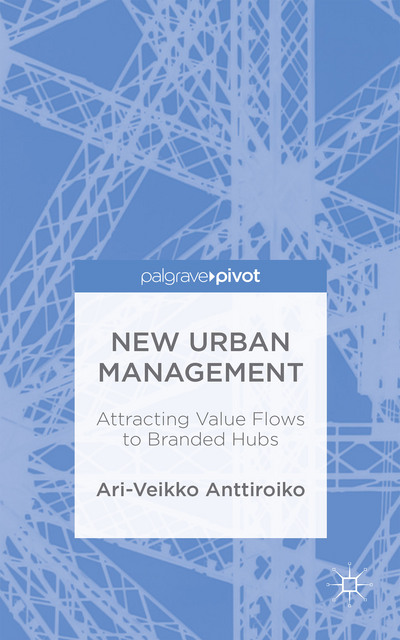